OTHER FISH OF THE AMAZON

There are 2500 documented species of fish in the black water rivers of Brazil’s Amazon known for the world’s largest Peacock Bass.  From 3 meter long Arapaima weighing over 400 lbs to the small Tetras shipped around the world as aquarium fish, these waters enjoy the most biodiverse group of fish in the world.  Barcelos, a town of 30,000 people and the original capital of the province of Amazonas, is the hub of Brazil’s Peacock Bass fishing industry as well as the freshwater tropical fish capital of the world. Over 50 million tropical fish are exported to the world’s market each year from this area.  The sport fisherman traveling to Brazil’s Amazon for a chance to catch Peacock Bass will also have an opportunity to catch a number of other interesting fish during their trip including Piranha, Traira, Bicuda, Aruana, Jacunda, Oscar, Pararucu, Pieco and Bait Fish.

Fishermen will basically encounter 3 species of Piranha in Brazil’s Amazon, the aggressive red Piranha which is the small red breasted beast portrayed as the man eater, the huge Black Piranha of Brazil’s northern Amazon which can weigh upwards of 6 pounds and the White Piranha, which is the predominant species anglers will encounter weighing from 2 to 4 lbs.  Piranha usually are in schools and can be encountered in fast water, slow water, shallow water and deep water.  These fish provide good sport on light tackle, with a wire leader that is!  Piranha can also be caught on jigs (although it is a one jig/one Piranha affair here), Rattle Traps and jerk baits.  This fish is great table fare and is the preferred fish by the indigenous peoples of the river.  In moving water Piranha are usually not a problem, but the rule of thumb in still water, such as back water lakes and lagoons, is to stay out of the water.  In answer to people’s question of how you get a piranha off the hook, I tell them…”give them to your guide!

Visualize a mullet with a mouth full of sharp conical teeth and you will know what a Traira looks like.  Olive drab green in color with a torn up tail and Satan’s eyes, this nasty predator will very seldom weigh 10 lbs and makes hollow plastic top water lures into intermediate sinking jerk baits very quickly.  Traira inhabit shallow, often muddy waters and will attack most anything thrown in their vicinity including small top water baits, jigs, jerk baits or spinners.  It is interesting watching the guides unhook these fish as they beat them senseless and then extract the hook with two pairs of plies, keeping their fingers well out of the Traira’s reach!

Bicuda is a name given to several long slender fish that resemble a freshwater Barracuda even though they do not belong to the same family of fish.  The toothy version of the Bicuda, Acestrohynchus microlepis, is a long thin yellow light green fish that does indeed resemble a Barracuda!  Seldom exceeding 24” and weighing more than a couple of pounds, this guy has mouth full of sharp toothpick teeth and will readily hit flies, jerk baits and occasionally top water lures.  They are found throughout Brazil’s Amazon, usually in shallow lagoons just under the surface.
The second “Bicuda” is a long slender toothless fish, Boulengerella cuvieri, that can reach 3 foot or better in length and weigh over 10 lbs.  This fish is usually found in the northern part of Brazil’s Amazon and can be caught on jerk baits or jigs worked just below the surface.

Aurana, also spelled Arowana holds the nickname “Monkey Fish” because of his aerial performances.  A prehistoric fish remaining unchanged for 150 million years he sports the head of a Tarpon and the body and tail of a Grinnell.  Aurana can grow to 3 feet in length weighing 15+ lbs.  Usually found under overhanging trees, they can jump over 3 feet out of the water to get birds and insects out of the overhanging limbs.  Aurana can be caught on jerk baits and occasionally jigs.  A neat fish to catch while you are in the Amazon fishing for Peacock Bass as they spend as much time out of the water as in it when you hook one.

Jacunda, a Pike Cichlid, is one of several fish in South America called a “Rainbow Bass.”  This small colorful member of the African Cichlid family can change from its usual marbled green & yellow  color sporting a black spot surrounded with a red ring behind it gill plates to a vivid almost transparent red when spawning.  Jacunda are diminutive, rarely exceeding 15”, with the world record weighing 1.8 lbs.  They are caught in shallow water lagoons more generally with flies than anything else, but will also hit small jerk or crank baits.  Another must catch species in the Amazon.

Oscars, a popular freshwater aquarium fish, is the “Bluegill” of the Amazon.  They can come in a variety of color schemes from dull, drab blue-green to in your face colorful with at least one ocular spot on their tail.  Seldom exceeding 12 – 14” they are found around brushy cover and will give a good account of themselves on ultra light tackle or a light fly rod.  Oscars will hit small jerk baits or a bright Clouser type weighted fly or foam bug on a 4 or 5 wt fly rod and will remind you of fishing for Bluegills.

Arapaima, called Pirarucu in Portuguese, is one of the largest if not the largest freshwater fish in the world with the largest member of its species weighing in at 484 lbs.  This ancient lung breather will reach up to 10+ feet in length and is becoming less and less common as its white meat is delicious and in high demand.  When you go into the Indian villages on the Brazil’s black water rivers is not unusual to see the women using the 1 ½ to 2” scales as nail files or necklace pendants.  Found in shallow water or land locked lagoons, these monsters are able to survive deoxygenated waters as they raise to the surface to gulp air.  Their gills are designed to dissipate CO2 from their blood rather than diffuse Oxygen into the blood.  Occasionally hooked on jerk baits they are seldom landed.

Payara, sometimes called Dracula or Vampire fish, have a mouthful of teeth including two long toothpick like teeth in the front of their lower jaw that fit into conical nasal slots in their upper jaw.  These fast, powerful fish give you the impression they are headed in the opposite direction at 30 knots when they take a lure and try to burn the line off your spool.  These are fast water fish, usually found at the bottom of a waterfall or rapids and can weigh in excess of 30 lbs.  They will hit big streamers and jerk baits fished fast, but it is hard to securely sink a hook into their bony mouth.  You will seldom catch a Payara over 20 – 24” in Brazil’s Amazon as the slower waters of the Amazon are not prime habitat for Payara. 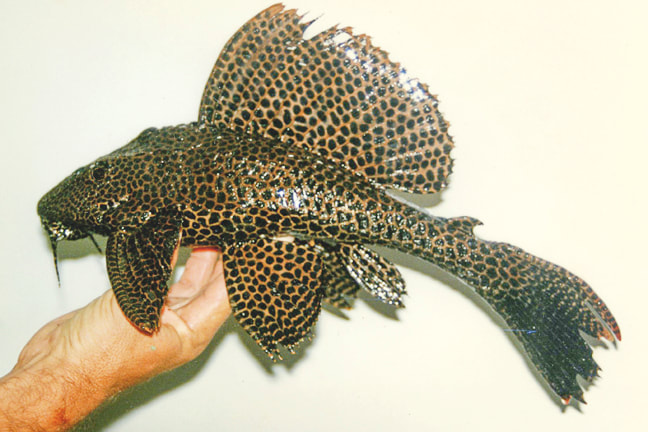 Pleco’s are commonly known to aquarium aficionados as sucker or cleaner fish.  Vegetarians, they are occasionally caught on jigs while fishing for Peacock Bass in shallow rocky areas.  Seldom exceeding 15“ these fish are interesting as they are said to have no bones, just cartilage.  The first one I ever saw, while jacklighting one night looking for Camens, was the one in the picture here, out of the water arched up on it’s pectoral fins checking out the world.

There are nearly 3,000 species of fish in Brazil’s Amazon and a large number of these would be considered “bait fish” by the Peacock Bass fisherman, including many species of fresh water tropical fish.  While fishing, it is not unusual to see a 6 – 10 inch baitfish literally fly out of the water, sail 10 – 15 ft, hit the water, then quickly fly back out again with a Peacock Bass in close pursuit.  This will quickly get your attention as you try to ascertain what kind of bait fish it was so you can try to match your bait to its size and color. While having lunch one day sitting in the boat under a shady tree I began to toss crumbs of bread from my sandwich into the water attracting tiny minnows ½” long, which attracted bigger minnows a couple of inches long, which attracted baitfish 4 or 5 inches long.  In about 5 minutes with half my sandwich floating in tiny bobbing crumbs around the boat there is this huge “swoosh” as several 12 -14” Peacock Bass made a darting run through the feeding bait fish right under my boat.  I realized I had just experienced the “Readers Digest” version of the food chain, Amazon style!  Although very few operators will allow you to fish with live bait as the mortality rate on released Peacocks is high, looking at the bait fish of the river gives you a good idea of size, body conformation and colors helping you to select lures and tying flies for Peacock Bass.
https://hc.weebly.com/hc/en-us/article_attachments/203664978/Google_Analytics.png