Since 2002 Brazilian authorities have granted River Plate exclusive fishing permits on more than 10 Indian Reservations and Government Preserves.  By managing these 8 million+ acres of private lands encompassing over 1,500 miles of black water tributaries, River Plate has been able to manage the fishing pressure on the black water tributaries they fish.
​View video at:
https://www.facebook.com/RiverPlateAnglers/videos/1294410417238467/
​The Importance of Fishing Private Lands

Nearly all the trophy Peacock Bass are caught within a 500-mile radius north, west and south of Manaus, Brazil.  The Amazon is so vast that the rainy season, during which the water levels may raise 10 – 30 vertical feet, occurs during different time frames.  There are 4 distinct dry zones in this prime trophy fishing area that provide prime water levels for Peacock Bass fishing at different times of the year.  During the dry periods the rivers are within their banks, consolidating the fish and making for prime time to fish for Peacocks.  Outside of the dry zone periods, the water levels increase and flood the rain forest causing the fish to scatter for the new food sources making them nearly impossible to catch.  River Plate has exclusive rights to operate on over 8 million acres of private land encompassing over 1,500 miles on 10 black water tributaries across all 4 dry zones.   Since 1998 River Plate, working together with the indigenous Indian communities and associations, in exchange for limiting the potential of commercial netting and destructive sport fishing activities, has contributed over 2 million dollars US in durable goods, financial compensations, food and legal support to these Indian communities.


90% of the sport fishing activities for Peacock Bass in Brazil’s Amazon take place on the upper Rio Negro and the mouths of its tributaries on public lands from October thru February.  During the 2018 – 2019 fishing season there was reported to be over 60 mother boats handling up to 30 anglers per week and a large lodge operating between Mora and San Gabriel on the main river channels of the upper Rio Negro.  Combined with the commercial fishing pressure and subsistence fishing it all adds up to heavy pressure on this fragile resource. 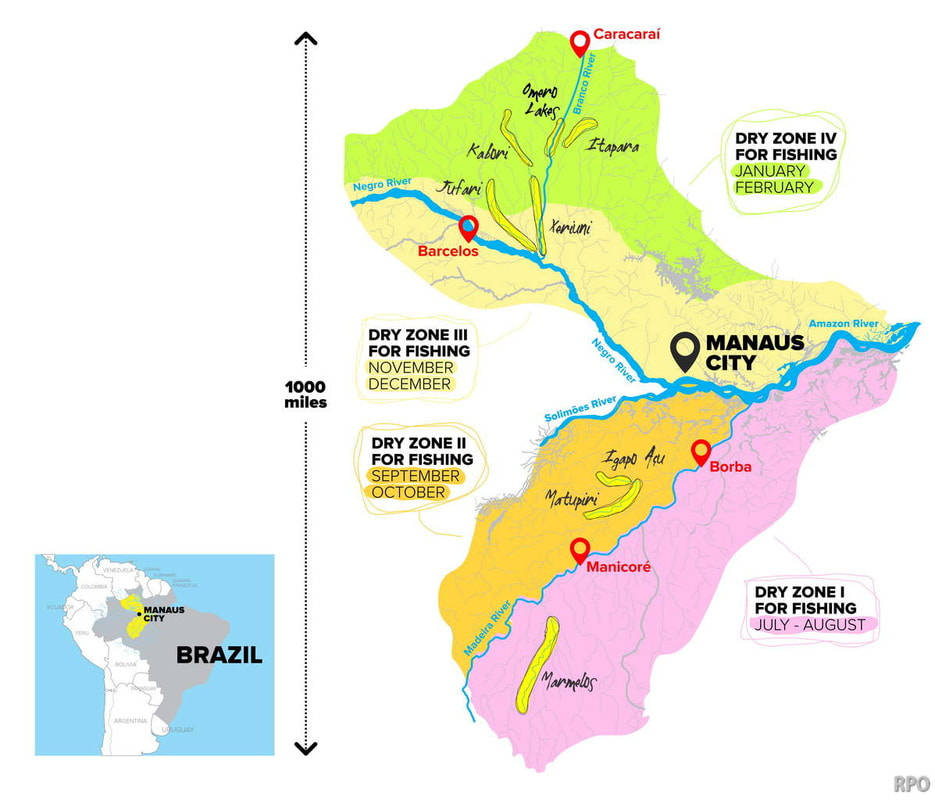 ​River Plate is the only sport fishing outfitter for Peacock Bass that fishes in 4 different dry zones within a 500 mile radius of Manaus from mid July to early March in Brazil’s Amazon.  This enables us to move our clients within these 4 distinct areas by charter Caravan wheel and float plane to find the most ideal water conditions at a given time frame.  For example, during the 2015-2016 fishing season, due to La Nina the water levels were at a historic low across Brazil’s Amazon and during the second half of the season, some operators on the upper Rio Negro were forced to suspend operations or operate from fixed locations due to the inability to navigate the extremely low waters.  River Plate was able to move their clients from areas of extremely low water in the upper Rio Negro and Rio Branco Basins to our private lands south of Manaus where water conditions were ideal and historically large numbers of Peacock Bass were being caught.

Dry Zone 1
Dry Zone 1, located south of Manaus, usually experiences ideal water conditions from the middle of July through the middle of August each year.  This is the Rio Marmelos fishery, encompassing over 100 miles of black water in the Tineray Indian Reservation.  Only 60 anglers a year are allowed to fish this river!

Dry Zone 2
Dry Zone 2, also located south and west of Manaus, usually experiences ideal water conditions between the middle of August and the middle of October.  During the La Nina influenced fishing season of 2015 & 2016, the lower than normal water levels produced excellent fishing conditions nearly all season.  Dry Zone 2 is the Rio Igapo and the Rio Matupiri fisheries in the Mahura Indian Reservation.

Dry Zone 3
Dry Zone 3, is located on the south side of the upper Rio Negro upriver from Barcelos and usually begins to experience good water levels in late October thru late December or early January.  This is our lower Rio Xeriuni and lower Rio Jufari fisheries.

Dry Zone 4
Dry Zone 4, located on the northern side of the upper Rio Negro and the tributaries of the Rio Banco, in the southern region of the state of Rohima and usually experiences ideal water levels from January thru early March.  Dry Zone 4 encompasses the headwaters of the Rio Xeriuni & the Rio Jufari, the Rio Kabori, Rio Itapara and the Omero Lakes.